Online Webinar Poland This event will be hosted online. POLAND
This webinar, which was part of the 2020 ULI Poland Virtual Conference, has now taken place. Watch it now on Knowledge Finder.
Go to official site
Register Yourself Register Two or More
View Event Attendees 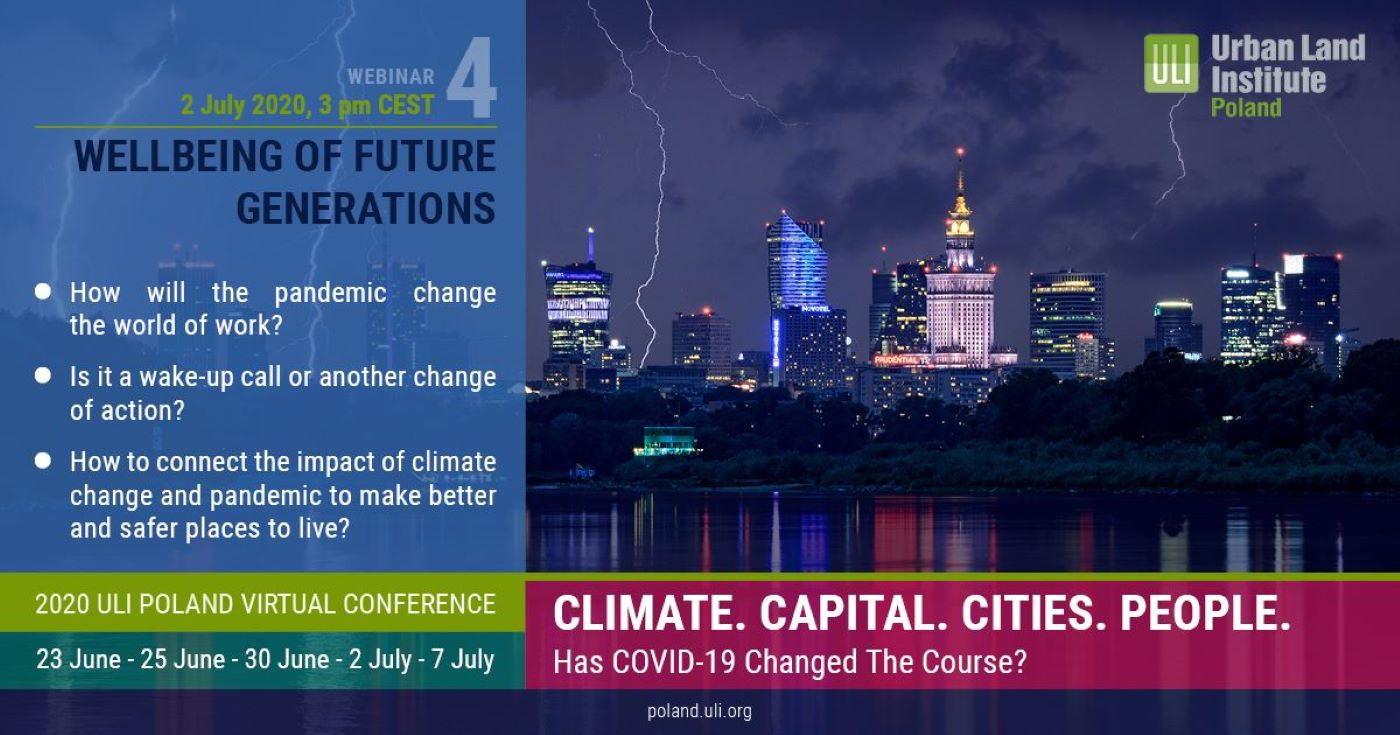 This webinar, which was part of the 2020 ULI Poland Virtual Conference, has now taken place. Watch it now on Knowledge Finder.
Recap of the event can be read here.

2020 ULI Poland Virtual Conference "CLIMATE. CAPITAL. CITIES. PEOPLE - Has COVID-19 changed the course?" consisted of 5 webinars held over the course of 2,5 weeks. It started on 23 June and continued on Tuesdays and Thursdays through 7 July. Each webinar lasted for one hour, from 3 pm to 4 pm CEST.

Our international keynote speakers connected remotely to deliver a high-quality e-conference. Its programme was also updated to reflect the topical impact of #COVID19 on the climate, capital, cities and people.

Webinar 4. WELLBEING OF FUTURE GENERATIONS IN VIEW OF CORONAVIRUS AND CLIMATE CHANGE

More about the speakers below. During the summer of 2014 Dan transitioned to his new role with Blue Zones, LLC. Seen as a visionary, innovator and source of inspiration and collaboration throughout his career, Dan is a nationally recognized authority on walkable, livable and sustainable communities, complete streets, and bicycle and pedestrian facilities and programs. Dan has become known for his pioneering work and leadership to mentor many in how to transform communities into places for people first; all while still accommodating the car, and not the other way around. In this new role as the Director of Innovation and Implementation, Dan oversees many additional community-built environment transitions, making dozens, and eventually hundreds of communities healthier, more active places to live. Dan has always been a pioneer in his work, staying up on holistic trends in transportation and land use, and becoming a sought-after master of implementing change. In 1980, staff for Governor Bob Graham, chose Dan to help transform the Florida Department of Transportation, which made it one of the first multi-modal transportation agencies in the nation. As early as 1991, well before the term complete streets was coined, Florida became known for its holistic look at street making, helping create place out of space. Dan pushed for change, and became the nation’s first full time pedestrian and bicycle coordinator, a position now required in all 50 states. At the age of 60 Dan broadened his skill sets, embracing urban design and land use while serving as a principal and senior urban designer with the community-planning firm Glatting Jackson (from 2005-2009). Dan currently serves as an advisor for several national organizations, including: Walkscore (www.walkscore.com). Dan’s efforts to get the world “back on its feet” earned him the two of the first-ever awarded lifetime-achievement awards. The first was issued by the Association of Pedestrian and Bicycle Professionals. The second was issued by the New Partners for Smart Growth. The League of American Bicyclists named Dan as “one of the 25 most significant leaders in bicycling for the past 100 years.” In a peer driven process Planetizen Magazine ranks Dan as one of the 100 most significant urban thinkers of all time. Time magazine in 2001 named Dan as one of the six most important civic innovators in the world. And that same year the Transportation Research Board (National Academy of Sciences) honored Dan by making him their Distinguished Lecturer for that year. In 2014 the White House honored Dan as a “Champion of Change for Transportation”. Dan pioneers change in fields he helped create. He has more than 40 years of experience helping create livable communities. Dan served for 16 years as the first State Bicycle and Pedestrian Coordinator for the Florida Dept. of Transportation. This program became a model for other state programs, and in 1991 launched one of the nation’s first and most successful complete streets programs. Dan and his wife, Lys, co-founded Walkable Communities in 1996. Since then, he has helped more than 4,700 communities throughout the world become more livable and walkable.
View in Member Directory Will open in a new window 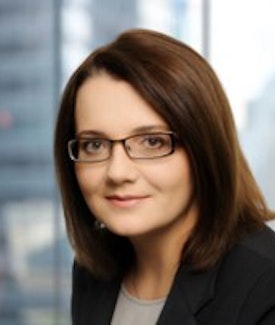 Expert in the field of corporate income tax and international taxes, specializing in advising real estate companies and corporate restructuring. Leading expert in tax advisory in Poland according to the “Women in Tax” ranking, International Tax Review, (2017, 2018, 2019). Partner in MDDP’s Income Tax Practice, awarded by the Rzeczpospolita in two consecutive years for handling prestigious transactions. She manages projects related to investments in real estate located in Poland and other Central European countries. She advises clients at all stages of business – from making decisions and choosing the optimal legal form for investments, through ongoing advice related to the specifics of the development industry, to exiting the investment. She implemented projects regarding, among others: - establishment of investment platforms of office real estate, commercial rea estate, flats for rent, warehouses and student houses; - preparation and introduction of real estate companies to listing on the WSE; - real estate transactions – both in the form of selling shares in real estate companies and of selling real estate itself.
View in Member Directory Will open in a new window Mette Skjold is partner and CEO of SLA and has more than 15 years of experience in sustainable urban planning and architecture, solving some of today’s hardest urban problems. Thus, Mette has a deep understanding of creating high quality, green public spaces to improve the public health and stimulate social interactions - while helping urban challenges regarding climate, sustainability, economy and social diversity. Besides her masters degree in architecture from Aarhus School of Architecture, Mette also holds an international master degree in Leadership and Innovation from Copenhagen Business School.
View in Member Directory Will open in a new window After studying economics at Tulane University in New Orleans, Louisiana, USA, Marnix began his professional career in 1987 at Cegos Belgium as a consultant. In 1989, he took his first steps in the real estate sector (family portfolio). His own company Allfin (°2001) became one of the leading real estate developers in Belgium. In 2014, Allfin took a 29% stake in Immobel, listed on Euronext since 1863. Following the merger between Allfin and Immobel in 2016, he became its Executive Chairman. As of 1 July 2020, Marnix will become chairman of ULI Europe. Previously, he was Chairman of Urban Land Institute Belgium (2015-2018). Marnix is married to Michèle Sioen, CEO of Sioen Industries. They have 6 children.
View in Member Directory Will open in a new window

This exclusive event which will take place virtually on December 2nd, 2020 will unpack the new realities of resilience during a pandemic, while examining the ways in which industry leaders can make informed decisions to further protect communities and investments from future climate risks.

Join us for a virtual tour of TRANSAMERICA PYRAMID, an iconic office building boasting the skyline of San Francisco, and the story of building's recent sale told firsthand by the transaction team followed by Q&A.

Online Webinar Poland This event will be hosted online. POLAND